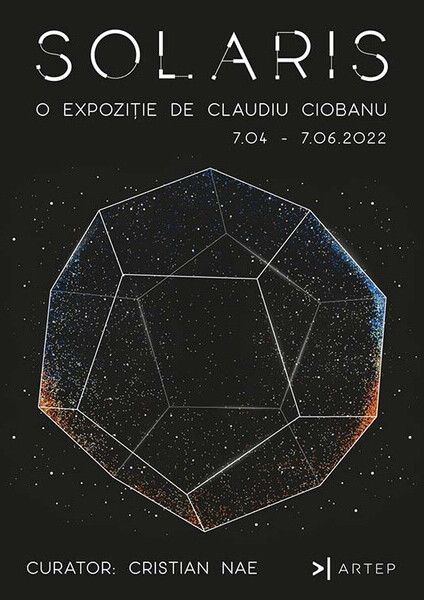 "The exhibition borrows not only the title, but also some literary and visual motifs from Stanislav Lem's novel of the same name (1961), as well as from its screen adaptation by director Andrei Tarkovski (1972). These borrowings are filtered through a personal exercise in cultural archeology of the science fiction imaginary adapted to become a tool for existential analysis of impending planetary catastrophe. Thus, Claudiu Ciobanu stages in a non-linear dramaturgy the meeting of anonymous space explorers and colonists with the planet-organism from Lem's novel. In the paintings of this series, made in a technique close to pictorial photorealism, the motif of modernist architecture in ruins, overrun by luxuriant, uncontrollable vegetation, becomes a stable scenographic landmark, which ambiguously situates the protagonists in a perpetual state of expectation. In an exercise of imagination mediated by digital technology, one of these characters becomes the subject of an augmented reality experiment, leaving for a moment the static presence that characterizes these characters, absorbed in meditative activities", explains the curator of the exhibition, Cristian Nae.

What is the definition of desire? Is it a feeling of physical attraction or missing someone or something, is it a certain aspiration to something, someone or to a given ideal state of fact?

What does it mean when we desire something and how can we express through our actions an idea that is as abstract as it is omnipresent? Claudiu and Marilena Ciobanu show us how, in the absence of a `body` of such desire, the latter takes the shape of each individual carrying it, often in silence, being an intrinsic, singular attribute of the very character. A `desire` cannot be identified, and yet it can be shared by joint common experiences, by the thoughts one infers from various instances, by the very subtlety of unwinding. Quite distinct from the majority of representations revolving around this topic, the two artists point out, through the absence of classical benchmarks, their very own perception of the human being, seen as the receptacle and not as individuality.

If water stands for the space where our body which is partially sunk is capturing and deflecting light, in front of one infinite sky, the artist covers the body by a waterproof coat (and this is an allusion to one eventual new diving into the abstract), the desire being assumed from the instance. Seen from behind, the very same character, having his head covered, seems to be spinning around his own ego, everything happening in just one millisecond. The subtle raising up of the arms, the partial turning of the body standing for the continuation of one action – thought, of an introspection. Taking the head out of the hood, releasing the hair, releasing the integrality from the restraints of context, all these make the viewer feel that the situations – places that the artist carries us through, may be possible travels to one’s own self. From the relevant technique perspective, Claudiu Ciobanu introduces a set of works that are carried out by cyanotypes, and this is one versatile technique in terms of the said work life cycle. The very work is subject to an entire re-inventing process, subject to the environment it is exhibited, it can easily deteriorate (when exposed to strong light), and it can regenerate in the dark. 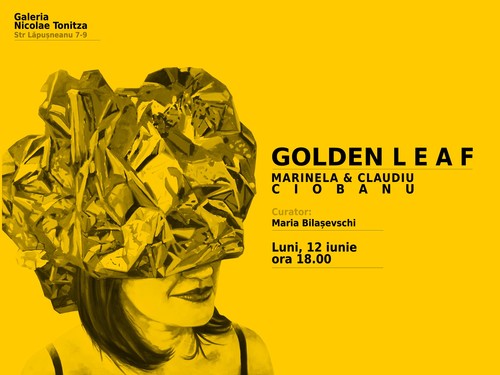 Claudiu and Marinela Ciobanu present two projects which are different in form and yet united in terms of discoveries, under a brilliant semantic hat deriving from the getting together of keywords laying the foundation of searches such as `Gold` and `Leaf`. The action initiated by Claudiu Ciobanu, where the central motif is `gold`, starts from challenging everything that means preciousness, glamor, and opulence. Gold, under its form of a crust covering the face, ornamenting or hiding bodies, no longer serves as symbol of a given social standing, yet in fact it is something that blinds, hides and literally suffocates the character. This precious material becomes for the artist a sort of manifesto of shallowness, in terms of the veil masking the contents and substance, being subject to an entire demystifying process which reinstates man in the forefront.